Seattle – Prepare for an interesting weekend as a mass of cold air settles in the area. Not only will temperatures dip deep, but there is the potential for lowland snowfall across the state.

Before you get to the snow, there are flood alerts to be aware of until Friday morning. Areas near Puget Sound can experience minor flooding as water is pushed along the banks to beaches and streets. Most of Puget Sound is subject to a “coastal flood advisory”.

And we are also monitoring Mason County, where the Skokomish River near Potlatch is subject to a “flood warning” throughout the weekend.

Back to the potential for plain snow! Our weather headlines highlight the lack of time for this winter weather event. If we look at your Christmas forecast, most of us could see snowflakes flying around at some point from Saturday to early Sunday. The best shot for accumulating snow … along the coast, across the Strait and the Northern Strait.

Please allow extra time when driving during this bank holiday weekend. Rain wet roads and a heavy rain / snow mix will freeze up creating slippery conditions, especially the second half of the weekend. 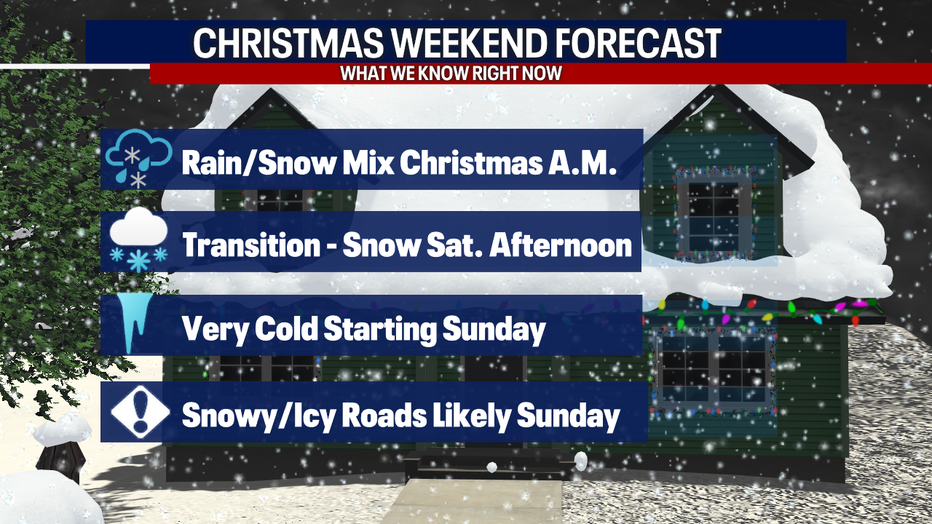 Those forecasts are all thanks to a rapid tracking system from the Northern Olympics on Friday, bringing showers to most of the region. This weather generator will help activate the flow of the Fraser River by bringing down a mass of very cold air into the WA. Snow levels will also start to drop allowing lowland snow to start as early as Saturday morning. Whatcom County will experience temperatures cold enough to cause snow to fall. It all depends on the exact timing of the intensity of the outflow from the Fraser. That said, people near Bellingham can wake up to a little snow on Christmas morning. For the rest of us, we’ll see rain and a rain / snow mix. 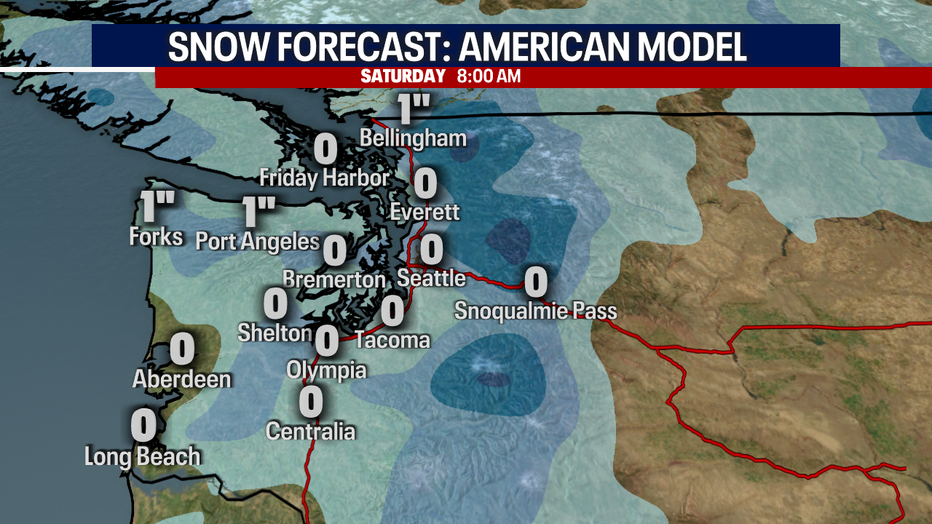 By the end of Saturday through Sunday, totals will resume for Whatcom and San Juan counties, as well as the Strait and Coast. Almost everyone sees the trail of a few inches of snow. This will sometimes make driving difficult for vacation drivers. Allow extra travel time. 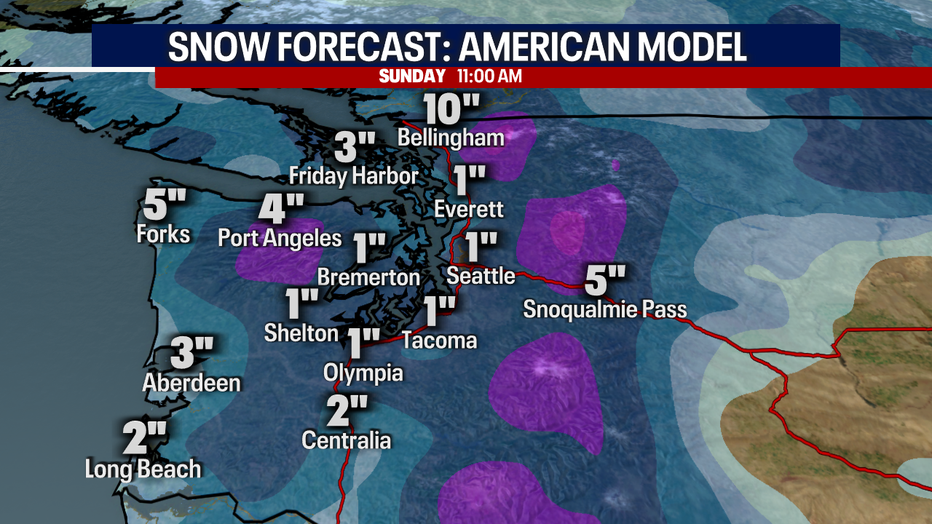 As we continue to see snow levels plummet, a “Winter Storm Watch” will be in effect Saturday through Sunday for the SW WA coast and the South Cascades. 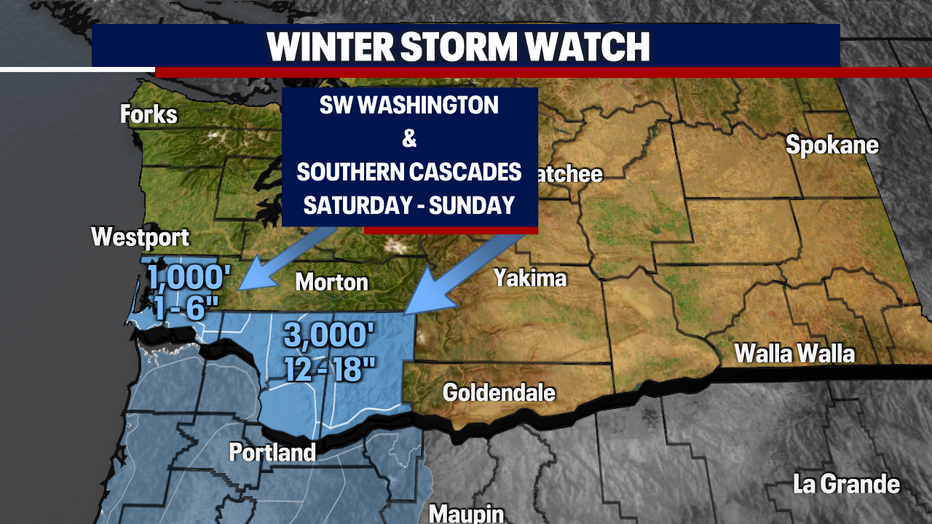 If you’re heading to Lumen Field on Sunday for the Seahawks vs Bears game, you better bundle up as the stadium will be cold! Winds will sometimes be blustery from the north at 10-14 mph. Pre-game enthusiasts may see a few snowflakes flying, otherwise expect a rather dry day. Maximums for Sunday only expected close to 30! The best seat might be at home watching the game on FOX 13! #GoHawks 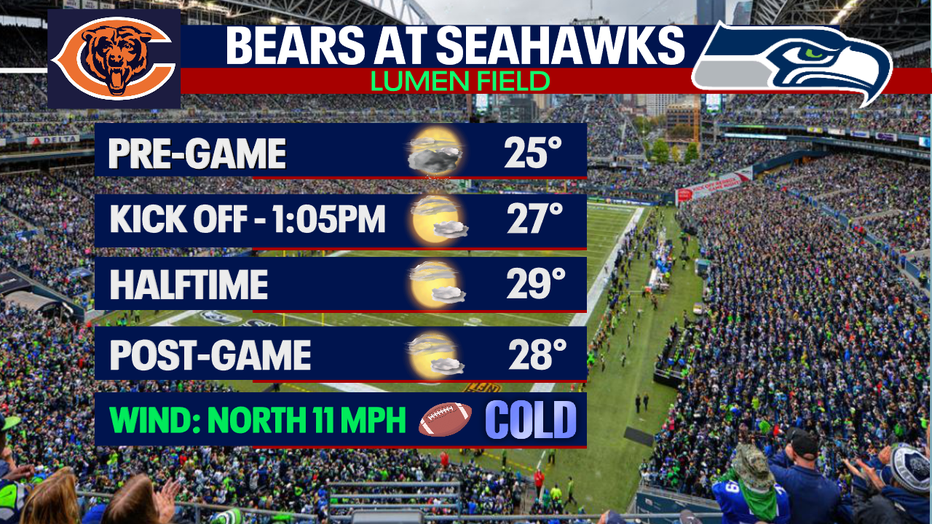 Once we get past Sunday, we dive into the freezing cold zone! Check out the high temperatures on Monday… only climbing into the low 20s with nights in my mid teens. We haven’t seen these cold temperatures for a long time.

With this “Arctic Blast” across the region, we can see frozen pipes. Be sure to cover these exterior stakes if they are not frost / frost resistant.

Happy Holidays to all ! ~ Erin Mayovsky, forecaster of FOX 13 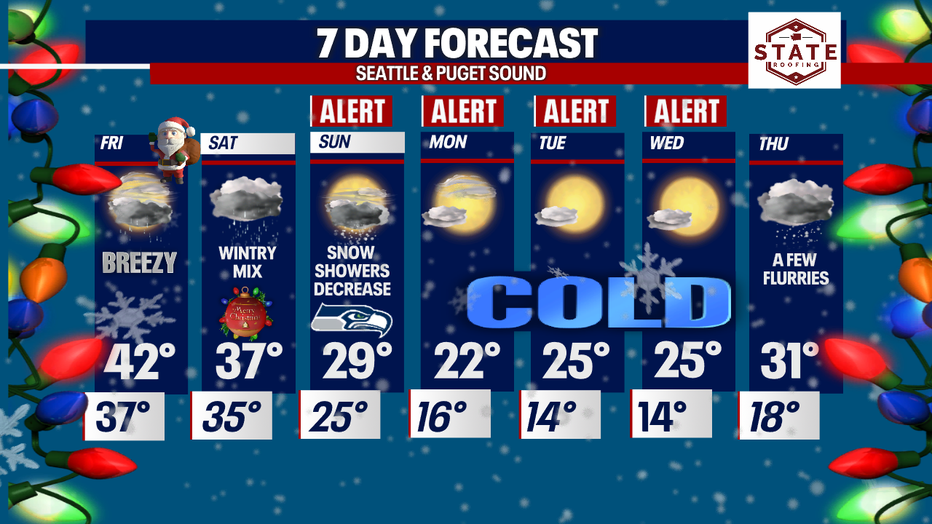