Atmospheric humidity spreads over the south coast and causes temperatures to rise with a surge in precipitation. Although February was a dry month for British Columbia, some cities, such as Vancouver, may actually end up with near-normal rainfall totals for the month.

A powerful atmospheric river moving through the area on Sunday is expected to bring days of soggy weather. The highest totals will fall over the Lower Mainland and Vancouver Island, where more than 100mm of rain is possible through Monday. In the Lower Mainland, most of the rain will fall east of Vancouver, but the city itself can expect to see 75-100mm. 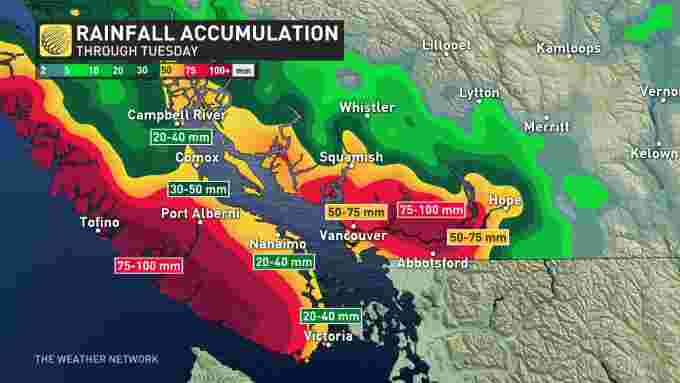 “Heavy downpours can cause flash flooding and water accumulation on roads,” says Environment Canada and Climate Change’s (ECCC) rain warning for the Fraser Valley. Although there are breaks in between, the rain and snow are expected to continue through Wednesday morning before easing off in the afternoon.

Wind gusts could reach 70km/h along the coastline as another system pushes ashore before weakening on Monday morning.

Accumulated snow will cover major mountain passes across the province, likely causing significant travel disruptions through Monday. Special weather reports and snowfall warnings are in place as the weather in the mountains can change suddenly, leading to dangerous driving conditions. 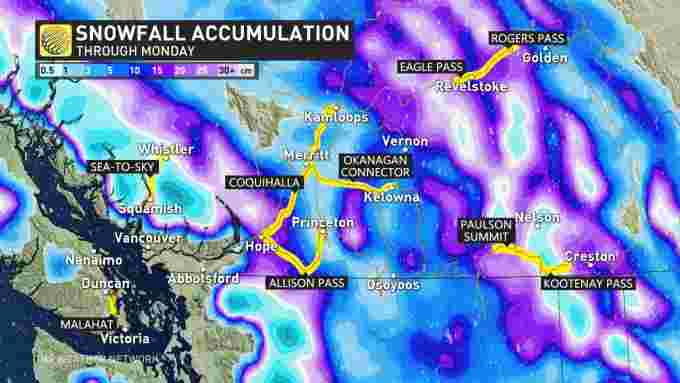 “Be prepared to adapt your driving to changing road conditions. Rapid accumulation of snow will make travel difficult. Visibility can sometimes be suddenly reduced in heavy snow,” ECCC said in the statement.

Until Monday, accumulations of 10 to 30 cm of snow dot the mountain passes. Some areas like Hwy 3 – Paulson Peak to Kootenay Pass might see 40-50cm.

The soggy pattern continues through the middle of next week as additional systems follow the south coast. A drier trend is expected for the second week of March.

Stay tuned to The Weather Network for the latest news on conditions in British Columbia.