Seattle – The second half of the weekend will be marked by rain, gusty winds and heavy snowfall in the mountains, as well as an isolated thunderstorm on the coast.

The showers in the lowlands turn to scattered Sunday, but the snow in the mountains will continue to be abundant at certain times of the day, making it difficult to pass the passes through the Cacades. 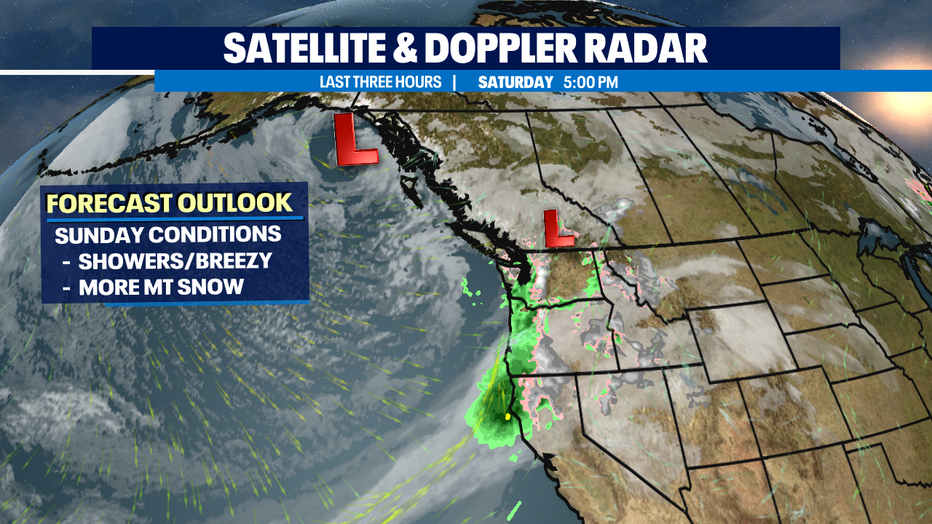 The waters of the river flow fast and are high, especially for the Skokomish River, near Potlatch in Mason County. This river is prone to flooding this time of year which is why a “flood warning” is in effect until Sunday evening. Although the river reached its peak on Saturday afternoon and will continue to recede, some places like Highway 106 could experience moderate amounts of water on the route. 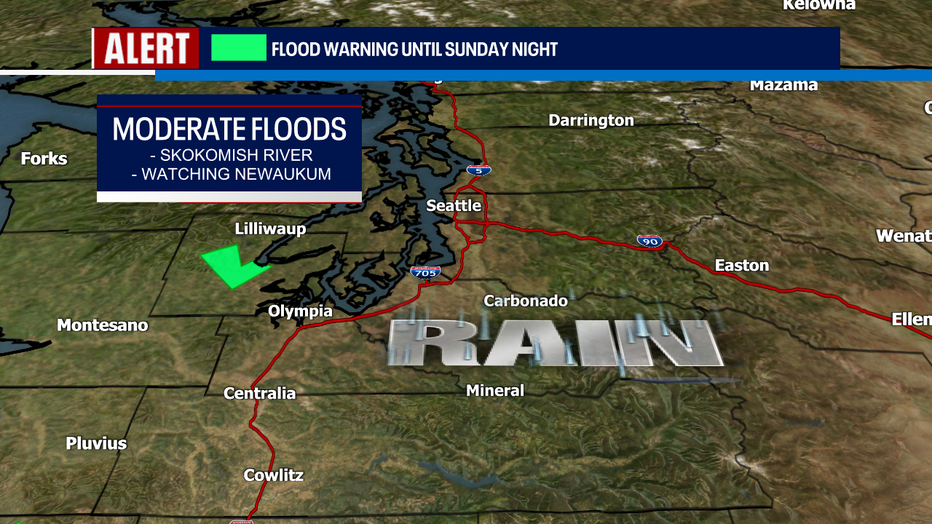 The Cascades won’t see too much break from the snow. Snow totals will continue to accumulate until Sunday evening, adding another 10 to 12 “of fresh powder. 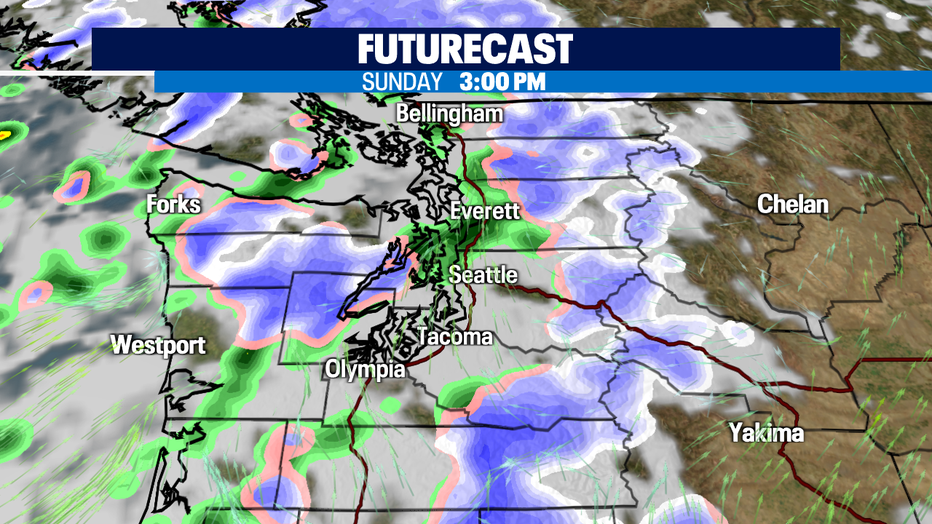 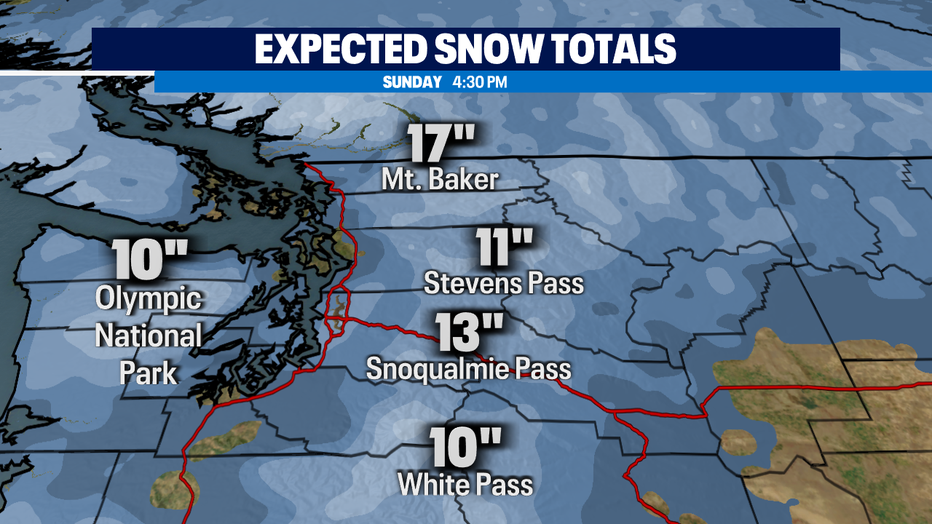 As snow levels drop, areas like Willapa Hills in the southwest of Western Australia are also fortunate to see snow falling. This is why a “winter weather advisory” until Sunday evening is in effect for parts of Pacific, Wahkiakum, Cowlitz and Skamania counties above 1,500 feet. During this time, 3-7 “is possible, which makes the travel conditions difficult. 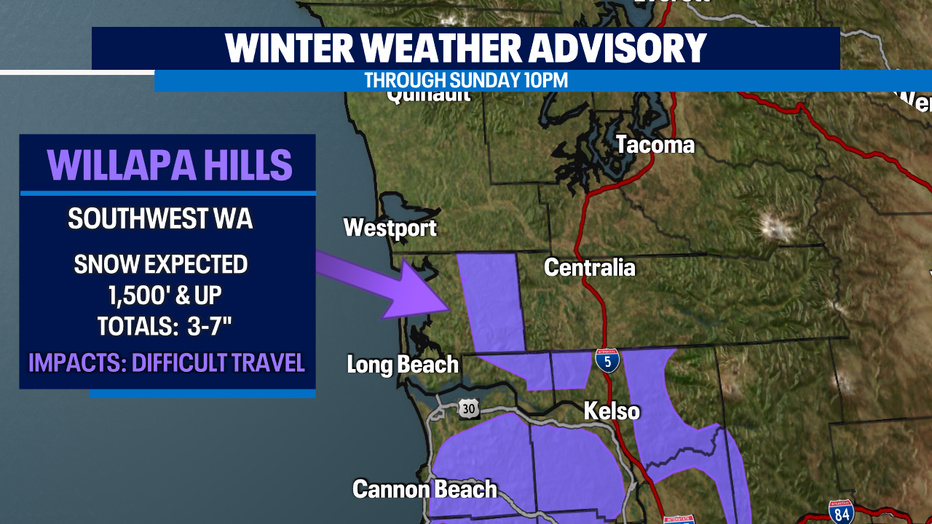 As the rain and wind in the plains begin to beat down, the mountains will be hit again as we begin the work week. Monday morning, snow will sometimes be abundant in the Cascades. 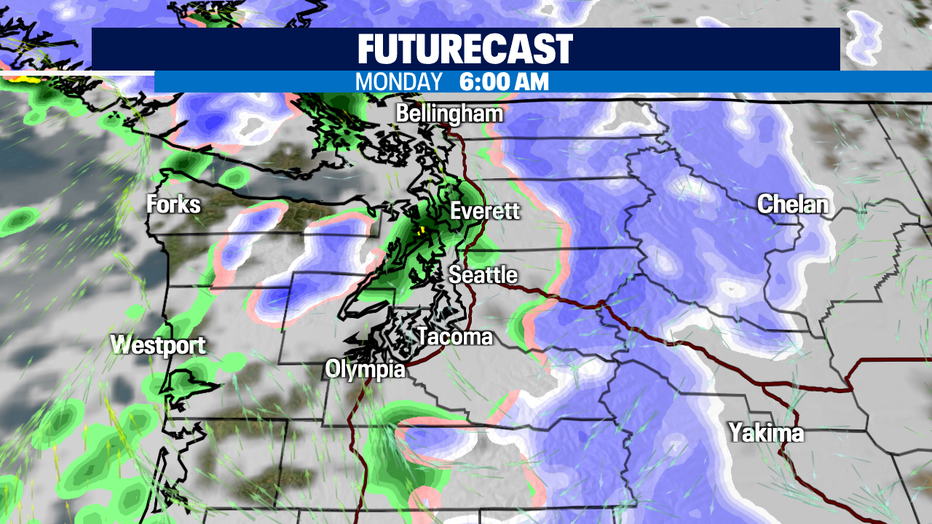 Snow levels will continue to drop to nearly 300 feet mid-week. This, combined with cooler temperatures in season, can open the door for a few snowflakes to fly into the lowlands. It won’t be a big snowy event, but at times uneven with the snow quickly turning to rain as we warm up in the 30’s above 40 low. 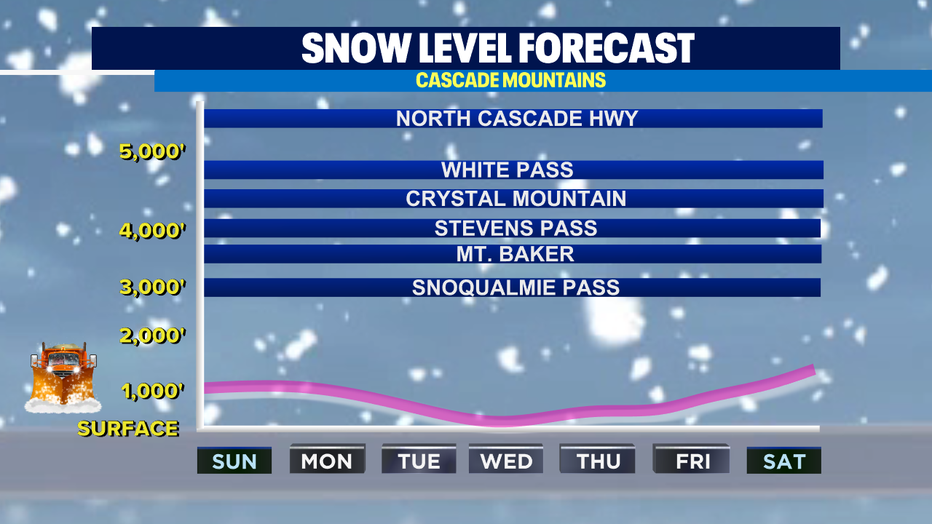 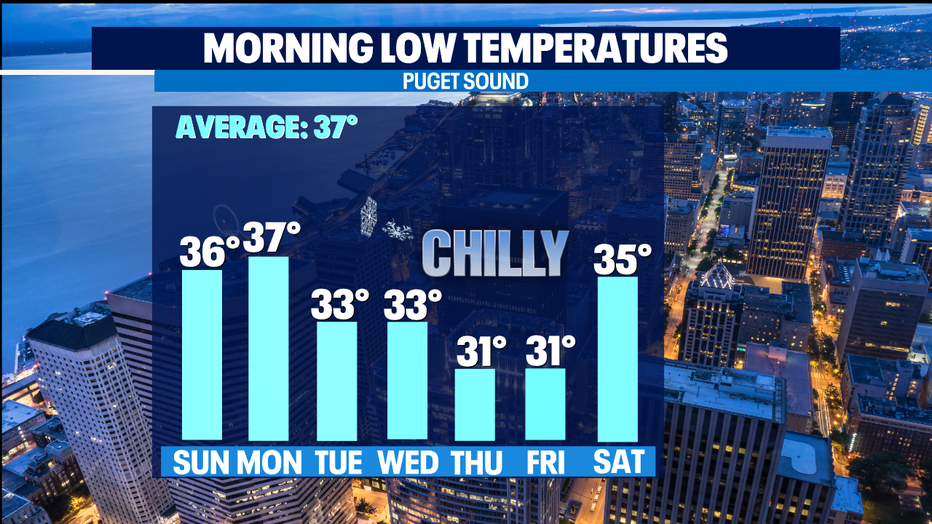 We lack humidity Thursday and Friday, which allows partially sunny to rather cloudy days.

Showers return late Saturday, mainly for the Southern Strait, as maximums struggle to reach 40! The average for this time of year is 47.

Have a good week ! ~ Erin Mayovsky, forecaster of FOX 13 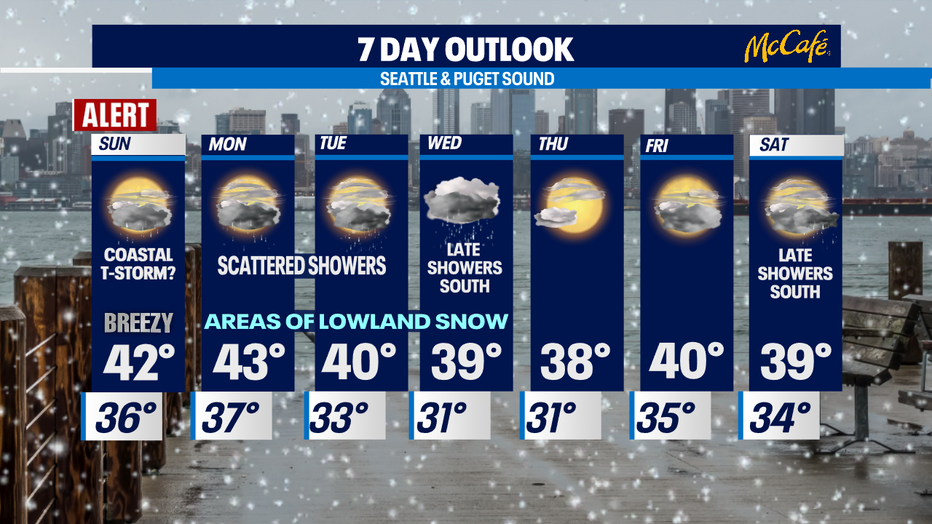 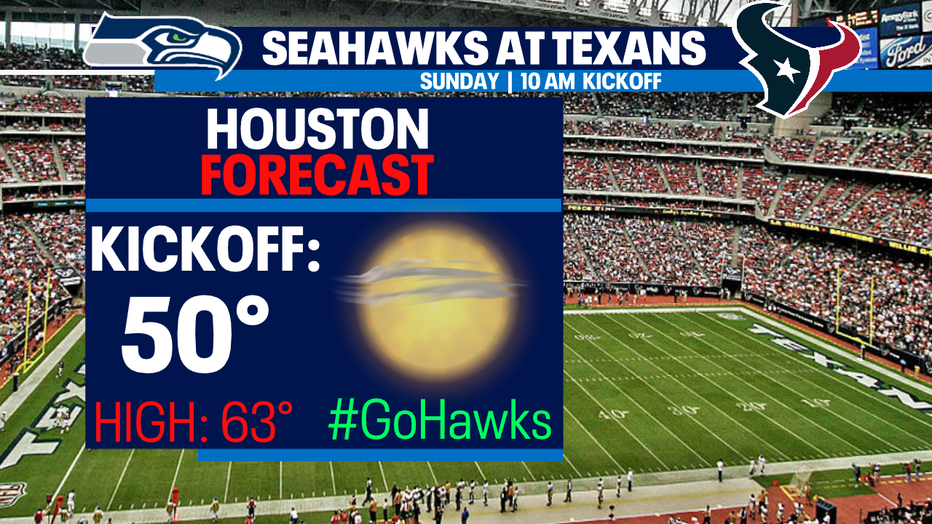 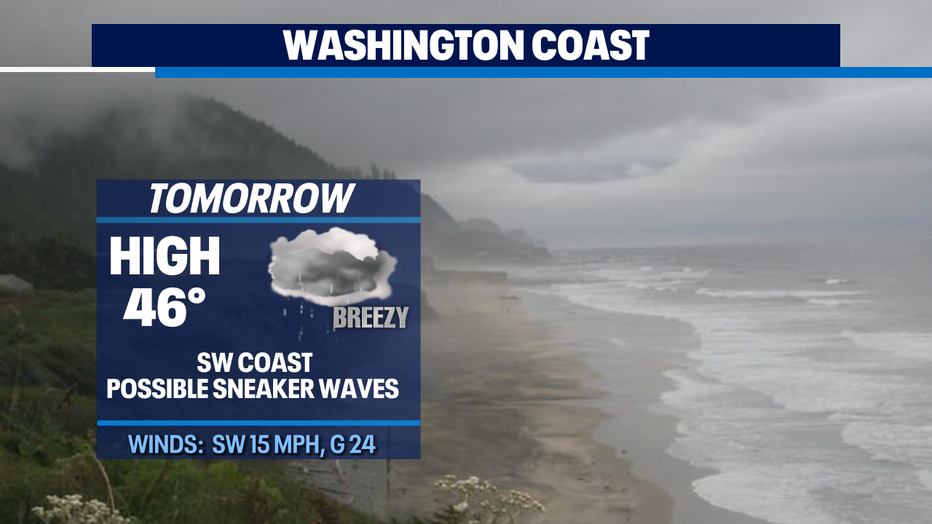 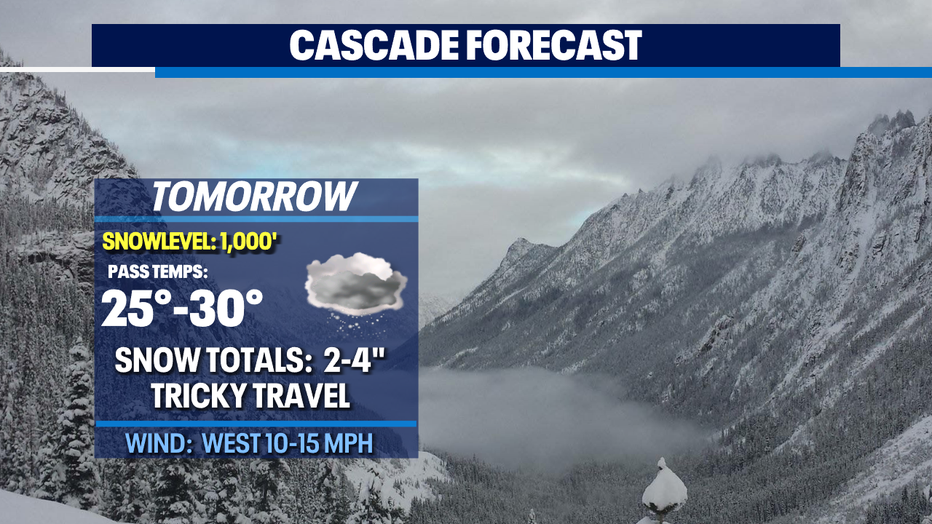 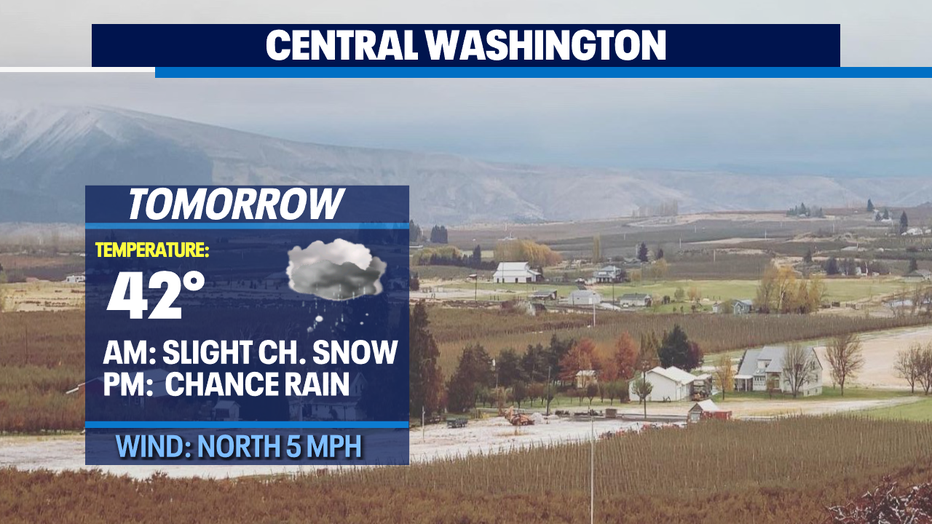