Inaugural festival enjoyed by hundreds Noah Bless, a 30-year veteran of the jazz scene, plays lead trombone with The Noah Bless Quintet for Nederland’s first Jazz & Wine Festival, just as the sky opened up and rained on the crowd. PHOTO BY CHRISTOPHER KELLEY

It threatened to rain all afternoon. The rain drizzled lightly as more than 450 guests roamed Chipeta Park among soft, improvisational sounds, tasting, drinking and buying from a plethora of choices. From cider and mead to wine and spirits, the Netherlands’ premier jazz and wine festival offered a wealth of options for connoisseurs to enjoy.

More than 15 local vendors, from Boulder to Erie and throughout the Peak to Peak region, proudly poured glasses and enthusiastically explained their products and processes.

Jack Rabbit Hill Farm, based in the North Fork Valley of western Colorado, offered its CapRock-brand organic vodka and organic peach brandy in addition to some premium boxed wines. Augustina’s Winery, a “one-woman winery” in Boulder, served a wide range of their selection, including their “Bottoms Up” Sauvignon Blanc. 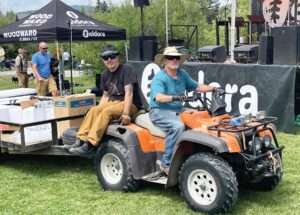 The Erie-based Old Mine Cider Company was one of several vendors offering alternative drinks, including their “Handlebar” Hard Cider, which they marketed as “adult apple juice.” Denver’s Queen Bee Meadery provided small-batch artisanal mead “produced in the old-world style,” while Lux Elixirs showcased its Blueberry Kveil and Sour Berry Meads.

Evergood Adventure Wines attracted curious festival-goers with their lemon-based wine, which featured names such as “Snow Bunny” for their fresh lemon wine and “Skier Pee” for their lemonade flavor.

There were also options for those who wanted to work up an appetite with something other than wine and various alcoholic beverages. The festival featured many food vendors who offered fantastic choices for wine pairings. 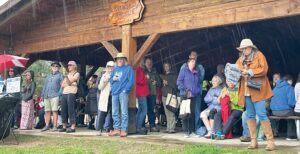 Local businesses and artisans have also set up tents on the Chipeta Park wetland, including The Mountain-Ear, Brightwood Music, Kaleidoscope Fine Arts Gallery and The Shop.

The musical acts at the event definitely brought jazz to the Jazz & Wine Festival, albeit in gloriously different and unique forms.

Daniel Jones, a pedal steel guitar virtuoso from the Netherlands, greeted festival-goers with his adventurous take on jazz from 12:30-1:30 p.m., and carried the spirit of the festival from 3:30-4 p.m., just before the heavy rain. .

The Gabriel Mervine Quartet, a Denver-based soul jazz band, found the perfect chords to match the festival vibe. With Mervine on trumpet, Dru Heller on drums, Tom Amend on organ and Alicia Straka on accordion vocals, the quartet created a French-inspired sound that paired perfectly with wine tasting in the park. . 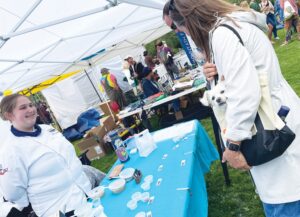 The Nederland Jazz & Wine Festival is presented by Ned To Go, a local website that supports local businesses and is sponsored by Eldora and Homes by Jackie Jones of Re/Max Alliance. Two dollars from every ticket purchased for the Jazz & Wine Festival was donated to Nederland Area Seniors Inc., a non-profit organization committed to helping seniors improve their quality of life through recreation, socialization and entertainment programs. awareness.

All available tickets have been purchased and the event has sold out.

The sky opened up more than halfway through the festival; around 4:30 p.m., rain fell quickly and heavily on Chipeta Park. Festival-goers donned their ponchos and took out their umbrellas, with many taking shelter under the provided blanket as well as the tents of vendors. 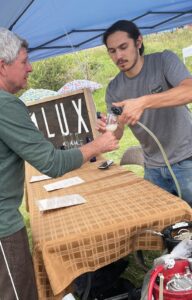 “Get to know your neighbors and local winemakers more intimately,” joked Nederland Jazz & Wine Festival lead organizer Stephanie Andelman on the Eldora stage before introducing the next musical act.

The Noah Bless Quintet took the stage and got the crowd dancing in the rain, starting with their classic rendition of “Singing in the Rain” and playing until the end.

The festival continued even though the rain drove a good number of people from the park and sent them flooding local restaurants.

Despite the rain, locals found the Nederland Jazz & Wine Festival a great success, as did the participating vendors. Hopefully this becomes an annual tradition in the Netherlands and serves as a success story for other new festivals and special events to follow.