LHASA, Oct. 2 (Xinhua) — On a narrow rocky path where even horses were hesitant to tread, a porter, carrying a washing machine on his shoulder, climbed step by step a peak over 4,600 meters above sea level , back home deep in the Himalayas.

It was a scene captured by a documentary produced by Japanese public broadcaster NHK in 2010.

The film bearer represented mostly young men from Medog, China’s last roadless county in the Tibet Autonomous Region, who had to walk for days carrying heavy loads in and out of the county landlocked in the mountains.

After the county’s lockdown ended in October 2013, when the Medog Freeway opened to traffic, Medog Porters made history.

Located in a deep valley of the Himalayas, Medog is besieged by high hills and primeval forests. For centuries, porters were the county’s main form of transportation.

It took porters up to five days to arrive in Pai township, the nearest town outside the mountains, as they had to climb snow-capped mountains without a concrete road.

The eldest son of a family that could not afford to go to school, Tenzin Gyatso, a Monba from a village in the county, started portering at age 12.

When he first arrived in Pai Township, he first saw wide roads, vehicles and television sets, forming a stark contrast to his hometown.

“We had nothing at home, not even electricity,” recalls Tenzin Gyatso.

In his life as a porter, he carried cement, steel and other materials for construction sites and daily necessities for a public store. He also used to bring home sausages, cigarettes and herbicides to sell at retail.

Using the savings he had acquired by being a porter and selling groceries, Tenzin Gyatso successively bought a hydroelectric generator, a radio cassette player, a television set and a washing machine, which he brought home alone. The generator did not stop until a nearby hydroelectric plant was commissioned.

In the isolated county, children had to walk for days to get to school, and many patients had to be carried on a stretcher or carried over their shoulders to a hospital in the city proper.

Changgar, a former porter from Baibung Township in Medog, still remembers when he and his fellow citizens took turns carrying an 85kg patient to the hospital.

“We move every half hour. On one leg of the trip, I carried the patient on my shoulders for two hours,” said Changgar, now 59, who weighed just 60kg at the start. ‘era.

Jamyang, vice president of Medog Hospital, said that due to poor transportation facilities, the hospital lacked major equipment and professionals, and therefore patients in serious condition had to be transferred to larger hospitals outside the county.

“Some patients died en route while being transported,” recalls Jamyang, who has worked at the hospital since 2008.

Due to long journeys carrying heavy loads, many male residents in Medog today still suffer from spinal and knee joint problems, according to Jamyang.

The situation changed considerably after the commissioning of the Medog highway in October 2013, with the influx of vehicles and machinery. Children can now travel to school by vehicle and, if necessary, patients can be quickly transferred to the city hospital, sometimes by ambulance. Porters are no longer required.

Benefiting from the improvement of the school situation, the four children of Tenzin Gyatso all studied at the university. “Young men are lucky because they don’t need to be porters like we used to be anymore,” he said.

After her studies, Tenzin Tsomo, the eldest daughter of Tenzin Gyatso, teaches in a high school in the city of Qamdo, more than 1,000 km from Medog.

To return home, the 30-year-old must rent a car to go to Bomi County, where she must be transferred to a bus. The entire journey takes more than 16 hours.

Much to his delight, the Sichuan-Tibet Railway currently under construction will pass through both Qamdo and Bomi.

“When the railway line is put into operation, it will be much more convenient to go home,” said Tenzin Tsomo. ■ 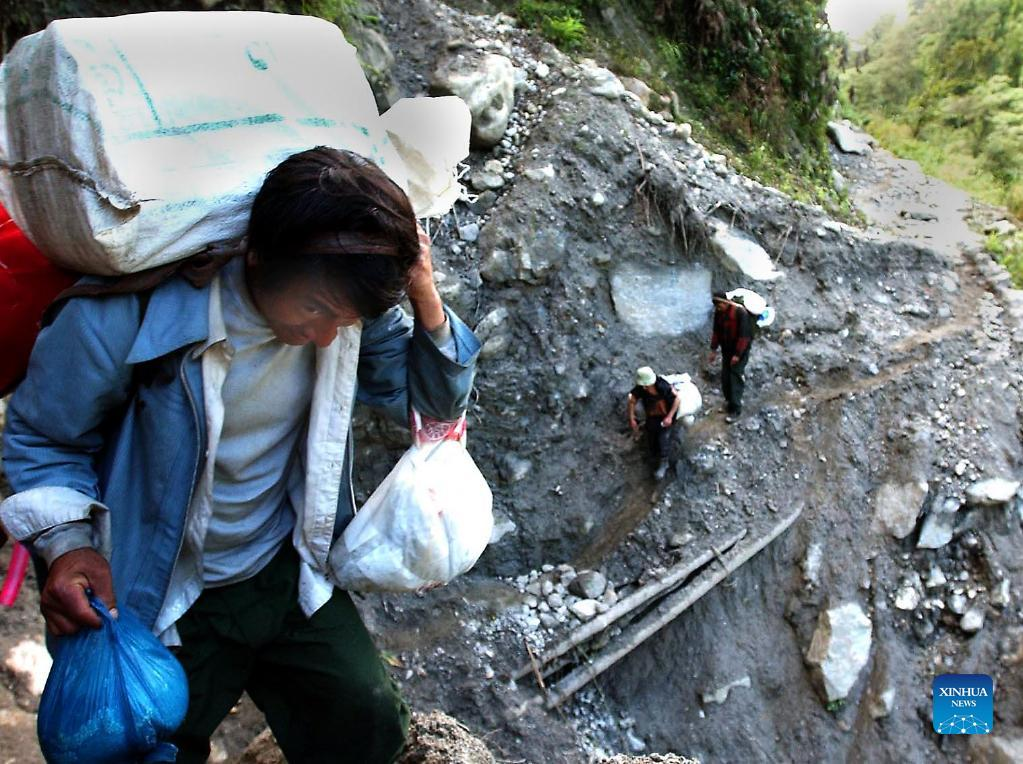