Dancing, hats, noisemakers, all night openings, turkey sandwiches, pizza, swing groups, dinners, movies, ski jumping dreams, house parties and more were in the minds of villagers 75 years ago as New Year’s Eve approached. Across America, World War II was in the rearview mirror. The veterans were at home. President Truman officially declared the end of hostilities on December 31st of 1946. America prospered while much of Asia and Europe starved. An immigration ban was proposed to Congress at the end of the year. The baby boom was on. 75 years ago Nyack and Rockland County were ready to party.

New Year’s party announcements filled several pages of the Journal News. With a few exceptions, restaurants and clubs that promised to have fun all night long are long gone. The Rockland Theater in Nyack has created a special program for New Years Eve and New Years. The couch recipes on offer welcome special treats for home parties. The forecast called for cold with melted snow but no snow on the ground at Nyack, much to the chagrin of the skiers. It was a busy holiday season and the village couldn’t wait to celebrate.

Where to find a New Years party in Nyack in 1946

Eddie Nolan is at S. Nyack. Courtesy of Nyack Library. 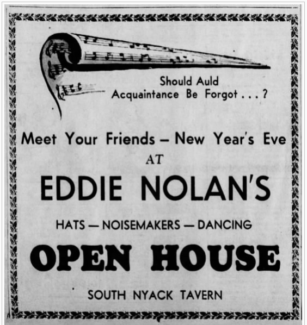 Eddie Nolan’s was a popular hangout for many years. Nolan promised no cover, dance and noise makers fees. Nolan’s fell victim to the NYS Thruway. After his South Nyack tavern was demolished, Nolan opened a tavern in Nanuet and later ran the St George Hotel.

The St. George Hotel, built in 1885, was still running strong 60 years later, albeit with a bit of a rebranding as the name was reversed in advertisements for their New Years’ open house with a orchestra. The St. George is still an office building today.

Charlie’s Bar & Grill opened after WWII and was a favorite saloon for Nyack even before it became the famous local nightclub, OD’s. Charlie’s New Years Eve sleepless night promised drinks and a turkey dinner.

Sonny Oliver (center) with the Syncopators.

Club Paradise was a major African American club. It was featured in the Green Book, a directory of “safe” places for blacks when traveling. During Prohibition, the club was known as the Royal Palace. On New Years Eve 1946, the club had dance the night away, 3 shows, five acts and music all night long by Sonny Oliver and the Syncopators. Sonny Oliver has opened several nightclubs and managed restaurants in the area. 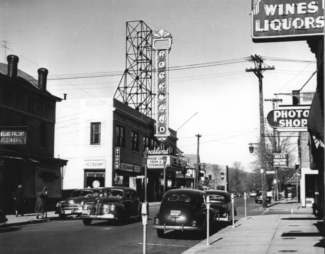 N. Broadway in 1945. The vocals for Bill’s Rendezvous can be guessed in the far right background / The Rockland Theater is across the street.

With a lounge in the front and a restaurant in the back, Bill’s Rendezvous was a favorite dance spot in Nyack after WWII. Bill lasted until the 1960s. The Runcible Spoon is now located at No. 37 N. Broadway.

Park Tavern promoted their party all night long. There was dancing in the back room. It had a reputation for being a “rowdy” place, where you could buy alcohol after hours. 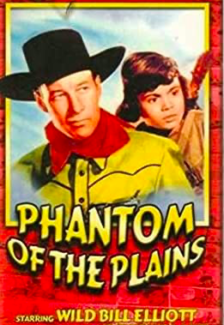 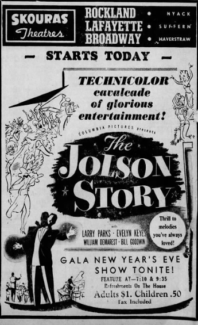 For a quieter fare, the Rockland Theater, located on N. Broadway between High and First Aves. Featured Jolson’s story. Jolson was not in this filmography but his performances were played in standard minstrel blackface. This racist film was a hit in America winning three Oscars. Larry Parks who played Jolson was nominated for the best actor award. A special children’s program was offered on New Years Day, including a free candy bar. On stage, a ventriloquist and his model in a cowboy show. Movies The enchanted forest in color with cartoons and Zane Gray Phantom of the Plains were shown. A children’s ticket costs $ 0.25.

The weather outside was terrible

The days leading up to New Years Eve had sleet (still). The New Year’s Eve low was 13 degrees. There was no snow on the ground but a ski jumping competition was still scheduled at Bear Mountain State Park a few days after New Year’s Day. The competition honored Torger Tokle, a record-holding US ski jumping champion who died fighting for the United States in World War II.

Home for the holidays? 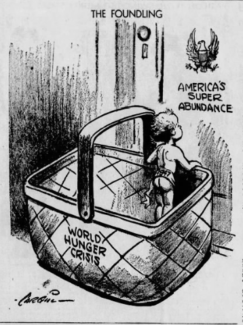 For those who stayed home to ring the New Year, the Journal News published couch recipes including a cheesy pickle couch roll using American cheese, pretzel stick skewers with wrapped cheese, Double-Deckers with liver sausage and hard-boiled eggs on crackers, and watercress and cream cheese wrapped in fan-cut celery wrapped in a carrot curl.

What was the rest of Rockland County doing on New Years Eve?

While downtown Nyack had the greatest concentration, it wasn’t the only place to party. the Journal News was filled with announcements for New Years Eve parties in Rockland County outside of Nyack. From the Sea Skipper on 9W in Congers to the Platzl Brauhaus in Ladentown, the noise makers had to ring in the New Year. Recognize one of these places? 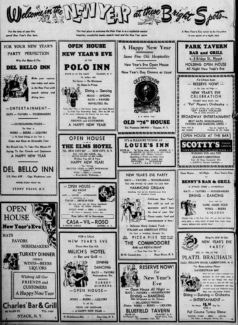 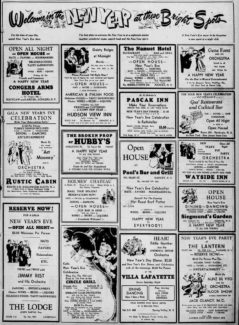 Michael Hays has been a resident of the Nyaks for 35 years. He grew up the son of a teacher and a nurse in Champaign, Illinois. He recently retired after a long career in educational publishing with Prentice-Hall and McGraw-Hill. He is passionate about cycling, amateur historian and photographer, gardener and dog walker. He has enjoyed more years than he wants to count with his beautiful companion, Bernie Richey. You can follow him on Instagram as UpperNyackMike.