The winners of the 2022 edition International Mountain Photo Contest have been announced. Now in its 8th year, the competition is organized by Club Vasco de Camping Elkartea, a mountaineering club based in San Sebastian, northern Spain. After sifting through thousands of entries from more than 60 different countries, the jury chose the 20 finalist photos.

The winning entry for the first prize was won by Yhabril Moroof Biscay, with “Young Gun”, a spectacular photograph of a ski jump under the lights of the sunset, in Baqueira, a Catalan ski resort.

This year I went to photograph the Freeride World Tour in Baqueira. I took thousands of photos and after the contest I came across my young friend Urko Yarza completely by chance. He is the future! In an instant, we improvised a sunset shot, and he gave me the best shot of the day, better than any I’d taken at the pros. For the composition, I took into account the position of the rider, the sun and the streak of snow, and I filmed with an off-center flash to bring up a little the shadows and the blacks of the rider who was dressed very dark . As for the editing, I mostly worked on focus and white balance and elevated it to warmer tones to be true to the sunset light.

Sasha Galitzki skis through frost from inside an ice cave in the Canadian Rockies. “Winter Window” is a product of curiosity. Our group was passing the foot of the Stutfield Glacier in Jasper National Park and we noticed a small hole in the snow covering the ice. Because the main objective of the day was to locate and photograph ice caves, we put our heads inside each hole we saw, just in case it opened up into a large chamber. This one in particular didn’t have one – it was just roomy enough for one or two people. Still, the view from a small frost-rimmed window offered great framing possibilities. I waited for my friend Sasha to ski through the frame and liked the result. I felt it conveyed the magic of winter in the Canadian Rockies.

While my friends were climbing the route, I was looking for mounts with a different point of view. I was on a dune where there were some small plants and I took some pictures that I really liked. I saw that the effect of the branches was very similar to a flame, showing just how I felt at that moment in the middle of the desert. The problem was that from there I could only photograph the climbers on the first pitch, so I decided to climb a mountain that was right in front of me. I was surprised to find more of these plants up there, so I repeated the same frame and this time managed to photograph the climbers and give that desert heat feeling to the image.

One of those perfect powder days you dream of. Super light powder and perfectly spaced shafts. What more could you ask for? 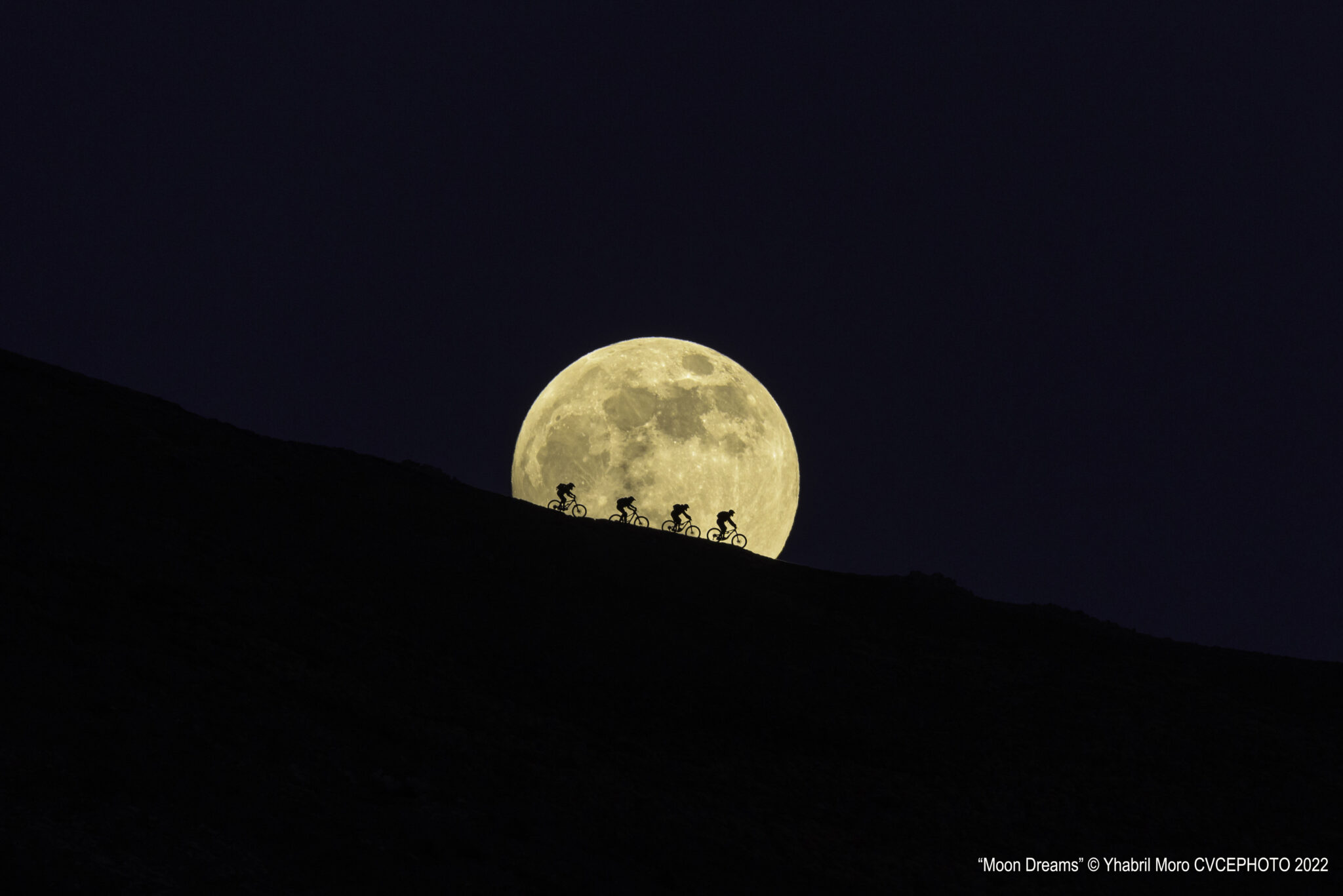 I had been looking for a photo like this for a long time, but I knew it would be difficult for me to find the appropriate location. The place where we live, Villanúa, is a small Pyrenean village surrounded by mountains where you have to climb very high to see the moon in time. I spent about a month searching until I decided to choose this place at an altitude of about 2500 m. I also tried to make it happen during blue hour so I could capture the contrast between sky, earth and moon with this special light. The day of the photo, the weather was cold and windy. It took us several attempts. I also had to move around to correct my position as the moon continued to rise, while they had to reassemble the bike to ride again until I got the comp I was looking for.

Here are some of my favorites from the other finalists:

While working on a documentary project about extreme kayaking, we traveled all over Iceland until we reached Aldeyjarfoss. It is one of the most scenic waterfalls I have ever seen due to the energy of the water and the strange basalt rock formations on its sides. It was late afternoon and the sun wasn’t as strong, so we had this epic dim light.

Snow had been predicted at high altitude, so I went to Urkiola Natural Park with the intention of taking photos in the beech forest. I usually go alone because I focus more on what I like to capture in my photographs. There were times when it was snowing so I decided to immerse myself in the forest without a tripod. Soon after, I saw that there were more people walking around, and after noticing those trees, still with the leaves in fall colors, I took advantage of the moment when that couple went through the hole, to take the picture. The truth is that I had a fruitful morning in this wintry environment.

This photo was taken in the fall of 2021, during a 2-day exploration on the Mer de Glace, in Chamonix, with friend and athlete Jeff Mercier, one of the best ice climbers in the world. Through this photo, I wanted to transmit both the beauty of this fragile element that is ice, as well as succeed in capturing the action of the climber and his precariousness. Most of the time I have 2 lenses with me, the EF 24-105 f/4 and the EF 16-35 f/8, but I don’t take a lot of gear with me, because I have already enough to carry with all the mountain and climbing equipment! I find that when you don’t have a lot of lenses and the conditions don’t allow you to bring gear, you have to think more about the framing. It boosts creativity.

Every year a dedicated team of snowboarders and skiers travels to one of Tyrol’s last glaciers. We mainly go to the Pitztal Glacier. There are two reasons for this: firstly, by going there every year, you see how quickly this beautiful and very old glacier world is disappearing due to climate change. Once the photo is taken, usually about 4-6 weeks later, this unique location of thousands of years old ice is gone forever. We want to document this rapidly disappearing world for generations to come. My kids won’t be able to see this anymore. Second, we use this beautiful glacier world as an exceptional location for extraordinary ski/snowboard photography. In this photo, rider Jochen Mesle is skiing on a very fragile ice cave.

Kevin is self-belaying on a big wave day. He feels the wall vibrate under the violence of the Cantabrian Sea and smiles.

I took this photo near a new moon phase. I was up there with some friends and spent the night by the lake photographing the Milky Way.

The 20 winning photos will be exhibited in large format in the gardens of Boulevard Saint-Sébastien from May 26, 2022. Alternatively, you can see them on the competition website.